This is part one of the two part post related to Docker, PostgreSQL databases and Anomaly data-sets.

In recent LinkedIn posts (original and Rami’s repost) and tweet, I asked the internet for their favorite datasets for anomaly detection problems, particularly in the time-series domain. I got lots of responses, and now have a massive amount of data to play with, thank you folks who responded.

To play with these data, I wanted a better solution than keeping data as CSV files, qs objects, or in R Packages. I wanted a database to store the raw input data, my processed data and algorithm results. While I’ve setup databases in the past the traditional way, this time I wanted the entire codebase to be portable & reproducible.

As a result, I setup everything using Docker and it works seemlessly. If you’d like to learn how to do so, follow along my next posts:

Why should you read this?

At the end of this tutorial, you’ll be able to rapidly setup a Docker based personal1 PostgreSQL database. You will learn how to quickly deploy PostgreSQL & RStudio using docker-compose. You will be able to access the database in R and begin development immediately. And most importantly, the whole process will be fully reproducible as you inherit the benefits of setup scripts and Docker.

This tutorial assumes you’re familiar with Docker and RStudio in a Docker environment. If you’re not, I recommend reading Reproducible Work in R first.

You will be launching two Docker images:

To permanently store your data beyond the life of the containers, you will mount two volumes, one for each container. I chose: 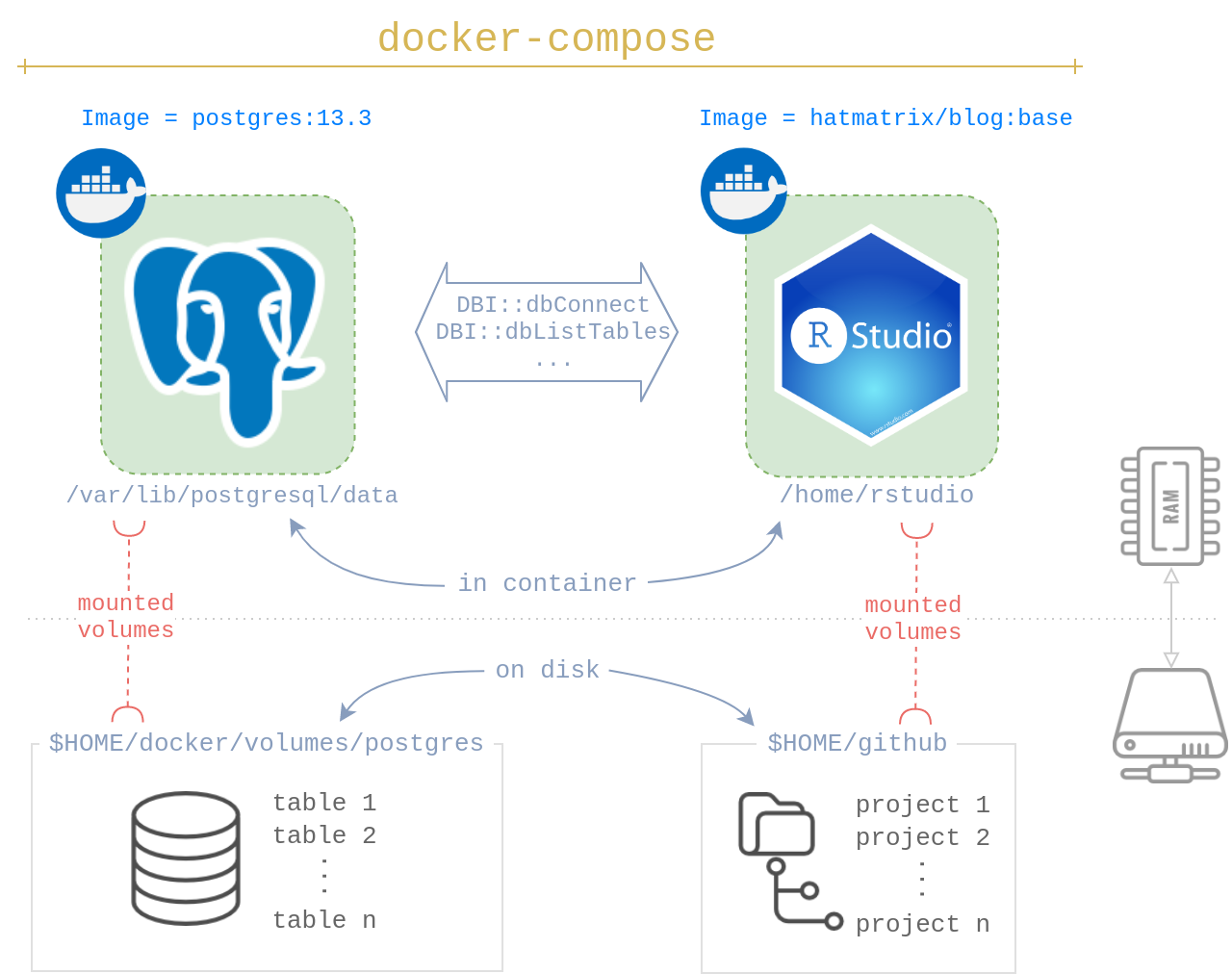 None of these paths, except for the in-container PostgreSQL are special; you can customize the others to your liking. By default, postgres:13.3 expects the database to be at /var/lib/postgresql/data. If you choose another database, modify this accordingly.

I use docker-compose to launch both PostgreSQL and RStudio services together. It’s convenient while also ensuring the PostgreSQL service runs first followed by RStudio. It’s easy to start or stop all the services using just a few commands.

You need to run these steps the first time you’re setting up the PostgreSQL database. I’ve stored these steps in 00-postgres-init.sh.

You need a local directory to store the PostgreSQL database in. Lines 3-10 take care of this for you.

Now it’s time to setup the database. You need two steps at a minimum to get started:

To manipulate the database, you need a PostgreSQL server running to process the psql commands. You’ll launch one using docker run. You need the correct volume mounted using -v. Next, we create the role and databases by piping psql commands into docker exec. Then, we stop the container.

In summary, now I have a PostgresSQL database:

tldr: How do you get going?

protip: to launch a browser (firefox for me) directly into RStudio as well, run this command in the directory where you have docker-compose.yml:

pro-protip: save an alias and generalize the command. The -f arg instructs docker-compose which file you’d like to use. Now engage can be run from anywhere in the system.

What’s in docker-compose.yml? We’re creating two services, one called db and the other rstudio.4

Let’s look at db first. Most of the arguments will look familiar if you’re familiar with docker run args. What’s new here is the restart: unless-stopped arg which tells Docker to only start PostgreSQL if it’s currently stopped.

The 2nd service is rstudio. Apart from the typical args, the interesting arg here is depends_on which tells Docker to only run this image after the database is up and running. Fantastic!

Use postgres.R to test your connection. Run your DBI:: commands you would normally, except for one key difference.

While making the connection, make sure the name of the host is the name of the database service you’ve chosen in docker-compose.yml. (Outside docker, you would have typically used localhost to connect to a local PostgreSQL server).

That’s it! You’re off to the races now. Use the DB as you normally would using {DBI}.

You have two options here: